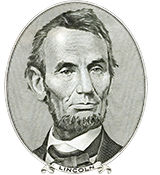 With the IRS moving tax day back for all U.S. filers for the second time in as many years, it’s time once again for a fun diversion by looking back at tax history! Test your tax knowledge using these questions to stump your friends and family.

Q: In 1861, President Abraham Lincoln enacted a flat tax on wages above $800 to help pay for the Civil War. What was the tax rate?

A: a. 3%. Even though Lincoln enacted this 3% tax, the Federal government didn't have an effective way to collect the tax at the time. The result? The tax fell far short of its projected revenue goals. Thankfully, the government now makes tax law changes with plenty of time to implement the change … oh, maybe not so much has changed after all!

Q: In what year did taxes start being withheld from paychecks?

A: c. 1943. In a need to drum up some cash for a war, the government started requiring taxes to be withheld directly from paychecks rather than waiting for quarterly or annual payments.

Q: The estate tax, which may apply to your assets after you pass away, was originally enacted in 1797 to fund which branch of the U.S. Military?

A: d. West Virginia. As of today, all but 5 states (Alaska, Delaware, Montana, New Hampshire and Oregon) have a sales tax. And it is as complicated as the imagination of the respective state legislatures.

A: b. 7%. Hard to believe the federal government didn't seem to need more taxes than this. The top tax rate did jump, however, to 77% five years later during World War I. The top individual income tax rate for 2021 is 37%.

A: a. March 15. The deadline was moved from March 15 to April 15 in 1954 to give taxpayers more time to deal with the additional complexities being built into the tax law.

Logging Into Your Client Portal
Viewing, Printing or Saving a Copy of your Tax Return
Uploading Documents to File Exchange